It’s not everyday you find someone that you can write songs with. I mean, you could write a song with just about anyone if you really wanted to, but the magic of true co-writing is rare, and hard to find. It seems to be reserved for a few special people who, if you’re lucky enough to find, will help you tap into a part of your own creative self that you never experienced, or discovered before.

My name is Brea Robertson and I’m a singer/songwriter from Australia. It’s been five years since I’ve truly collaborated with another songwriter to create something that’s ours. I used to make music with my brother, but after moving to Berlin, I started a solo project, hoping that one day I would magically bump into someone that I could write with. People asked me why I didn’t just form a band, or co-write with musicians I worked closely with. I never really knew what to say. It just wasn’t something that flowed. It wasn’t something that had fallen into place. Was I lazy to just wait for something to happen?

In February 2019 I was asked to participate in a regular singer/songwriter open stage in Berlin. Backstage, there was a tall, dark and very happy Canadian man I hadn’t met before. He was embracing the room with his warmth and humour. Soon, we were all a part of the same conversation, laughing at the new guy in town… Dom. I liked him. Conversation between us flowed and I felt like I’d made a new friend. Then he performed. I was amazed. I performed. He was amazed. We met each other backstage at the end, buzzing with excitement. Then he said it… “Let’s plan a songwriting session!”

I walked to his house the next week nervous and wondering what we were going to do. I’d never met with someone I didn’t know to just ‘write a song’ before. Should I show him a song I was working on? Should I just ask him lots of questions until it seemed a polite time to leave?

I showed him the song I was working on. He suggested one or two things then announced that he’d rather start something from scratch. Huh? Oh god…

Two hours later we had a song. And we both felt really good about it. It was called ‘Wake Up’.

I left that day knowing that I’d finally bumped into the right person. I’d waited, and it had worked. We continued to meet, and each time we were together, we’d write a new song. Neither of us had experienced this before. From the beginning I knew that I wanted us to be a duo. I really believed in what we were doing. It took Dom a bit more time. That was OK…I could wait.

We performed for the first time in October 2019 at Berlin’s songwriting hub Kindl Stuben in Berlin. It felt great to share our new songs with our local music community. The response was overwhelming, including an invitation from Lucas Laufen to be our producer. It was after then that Dom caught on that we’d stumbled upon something special. I received many voice messages that week full of future plans and ideas. He was ready!

It’s the song that helped create the duo that is now flora falls. 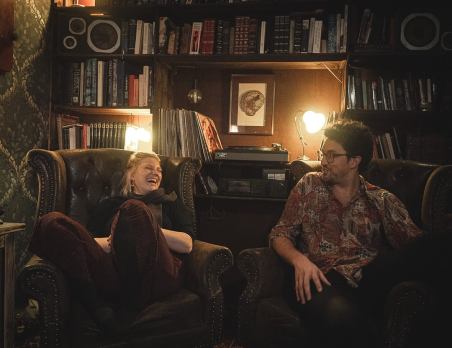 ‘Wake up’ is the debut single from flora falls. The song blends Brea Robertson (AUS) and Dominique Fricot’s (CAN) unique, powerful voices as they tell a story of dwindling love. The delicate harmonies and minimal instrumentation take listeners on a journey through memory, love and longing.

Beautifully produced by Lucas Laufen (Embassy of Music) the raw, acoustic production leaves space for the listener to appreciate the song’s honesty.